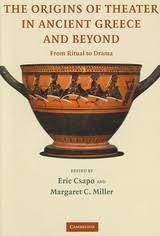 THE ORIGINS OF THEATER IN ANCIENT GREECE AND BEYOND HARDBACK: FROM RITUAL TO DRAMA

he Origins of Theater in Ancient Greece and Beyond examines the evidence for the pre-history and origin of drama. The belief that drama developed from religious ritual has been commonplace since the time of Aristotle but there is little agreement on just how this happened. Recently, scholars have even challenged the historical connection between drama and ritual. This volume is the most thorough examination on the origins of Greek drama to date. It brings together seventeen essays by leading scholars in a variety of fields, including classical archaeology, iconography, cultural history, theater history, philosophy, and religion. Though it primarily focuses up on ancient Greece, the volume includes comparative studies of ritual drama from ancient Egypt, Japan, and medieval Europe. Collectively, the essays show how the relationship of drama to ritual is one of the most controversial, complex, and multi-faceted questions of modern times.